Gregor Johann Mendel was the first person who found fundamental rules about the heredity of traits. He worked with two kinds of peas, one sort round, the other wrinkeled. He first made shure that his experiments are reproducible, by crossing peas from the same kind and seeing whether their filial peas are again of the same kind.

Then he crossed the round and the wrinkled peas. Interestingly, the result was not $50\%$ round $50\%$ wrinkled, as one might expects. One trait, namely the wrinkled was lost. He then went on and self-crossed the resulting round pea with itself. What he found was, that some of the peas were round, but the wrinkled trait was back again. 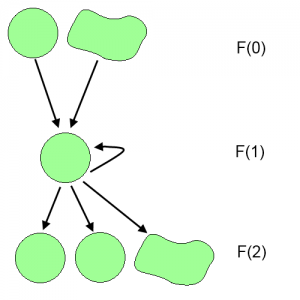 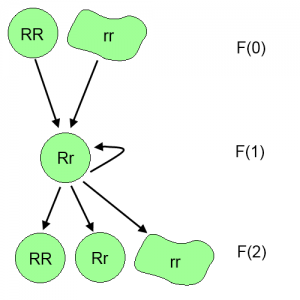 The peas of $F(0)$ carry eather the information for round (R) and wrinkled (r). Today we know that this Information is stored in genes. Crossing the beans results in peas that carry both, the information (R) and (r) but only one trait is acctually observed, so one trait is dominant over the other. Crossing peas from the $F(1)$ generation leads to (RR), (Rr) and (rr) peas in the $F(2)$ generation. Notice, each pea contains always two genes. This could be just a copy of the same gene or the alternative form (e.g. r is the alternative form of R) called allele (from greek meaning 'other'). All possible allel combinations that follow from self-crossing of the $F(1)$ generation are

Since (R) is dominant, this model explains the ratio of $3:1$ of round to wrinkled. This method also works out more traits, so that Mendel was able to make predictions about the abundance of traits in subsequent crossings.