Parallel to these achievements, the fundamentally stochastic nature of cellular processes became evident. That is, mRNA and protein levels vary substantially from cell to cell. The experimental work of M. B. Elowitz et. al. [Elowitz, M. B., Levine, A. J., Siggia, E. D. $\&$ Swain, P. S. Science 2002] was a starting point for many following investigations. They successfully investigated contributions of intrinsic noise $\eta _{int}$, such as from the random binding events of the molecular components, and contributions of extrinsic noise $\eta _{ext}$, originating in varying numbers of cellular components (e.g. ribosomes, RNA polymerases). Together, these sources of noise cause the total noise $\eta _{tot}^2=\eta _{int}^2+\eta _{ext}^2$. For strong promoters (lac-promoter without repressor and $\lambda P_R$) they found, low noise levels $\eta _{int} \sim 0.05$ $\eta _{ext}=0.03$. Repression of the lac-promoter leads to a total noise of $\eta _{tot}=0.41^2 \sim 0.25^2 + 0.33^2$ by only $3-6\%$ of the max. protein production.

The experiments of Elowitz et. al. show experimental evidence to suspected characteristics of the molecular machinery proposed by McAdams and Arkin [McAdams, H. H. $\&$ Arkin, A. Proc Natl Acad Sci U S A 1997]. Using a Gillespie simulation algorithm they studied regulatory cascades to answer how big the "switching delay" (time between switching on of the first promoter and the second promoter) is. They emphasize the invalidity of conventional kinetic equations, that is the continuous and deterministic formulation, for low concentrations of promoter operator regions and show, that for this situation expression takes place in bursts. Thus high variability in switching delays was observed. They also could show, that higher levels of transcripts, and lower translation rates, reduce fluctuations compared to less frequent transcription rates and higher translation rates. However, high mRNA levels are maintained by the disadvantage of high costs for the cell.


Today it is regarded as a fact, that cells which are genetically identical, grown in the same environment, exhibit different behaviour. One refers to this fact as phenotypic variation or phenotypic noise. Under certain conditions, populations of Bacillus subtilis for instance, consist of a small subpopulation which express the gene comK, that makes them competent, splitting the population in two phenotypes [Mettetal, J. T. $\&$ van Oudenaarden, A. Science 2007]. A very intriguing finding by Balaban et. al. is the phenomenon of persistence. They demonstrated with a microfluidics device, that the tracked populations consist of three subpopulations, two of which are persistent (type I and type II). After antibiotics treatment the persisters survived and formed new colonies, that were still sensitive to antibiotics. Cells switched between the three cell types by constant rates. Following the persisters back in time, they found that they grew slow compared to non-persisters, since the start of the experiment [Balaban, N. Q., Merrin, J., Chait, R., Kowalik, L. $\&$ Leibler, Science 2004]. This is clearly a situation, where growth alone can not serve as a measure for fitness, given the fact that fast growing individuals have not been selected for.

An important question in the context of cell-cell variability is, how noise is distributed among individual genes. Which genes are expressed with high fluctuations, which are not? What is the evolutionary link that explains these differences?

Stochasticity in gene expression can be useful. For instance, cells use noise as a tool in cell-fate decision making. The on switching of individual odorant receptors in a pool of over thousand possible receptors is one example [Raj, A. $\&$ van Oudenaarden, A. Cell 2008]. And in the same manner, decisions about photoreceptor expression in the Drosophila eyes are made.

In fluctuating environments, where nutrients are available only in pulses, stochastic switching can also be a strategy. Acar et. al. could show, that individuals whose switching rates correlate with the fluctuation frequency of the environment have a growth advantage [Acar, M., Mettetal, J. T. $\&$ van Oudenaarden, A. Nature genetics 2008].

Like aforementioned, successful deterministic description, was at least in some cases possible.

In contrast to findings of Elowitz et. al., Becskei and Serrano [Becskei, A. $\&$ Serrano, L. Nature 2000] earlier showed that negative feedback loops (like in the lac operon) stabilize expression levels and make them more robust to fluctuations. Nevertheless, it is important to mention, that Becskei and Serrano used a Tetracyclin repressor (TetR) in their experiments. Even, if the generality of the noise reducing effect of negative autoregulation is left to prove, it is true, that cells could in principle acquire this feature, if it is evolutionary favourable.

An interesting question in the face of noisy and quiet behaviour is, how the global structure is organized. Protein abundance and variation was studied for E. coli [Silander, O. K. et al. PLoS genetics 2012] and S. cerevisiae [Newman, J. R. et al. Nature 2006]. Results show large differences in noise among proteins. A finding of special interest is the correlation of noise with the protein function. Proteins responding to environmental changes are noisy, while others involved in protein synthesis are subject to lower fluctuations. Strong correlation in fluctuations among different mRNAs could indicate genes, regulated by a common regulator. This fact could be used to develop tools, that allow to find new regulatory patterns.

If both, protein levels that underlie fluctuations and those who do not, are connected in an interlocking network, the question of signal and noise propagation arises. Simple synthetic networks can help to address these questions. Transcriptional cascades have been studied and revealed that noise is determined by intrinsic fluctuations, transmitted noise of upstream genes and global extrinsic noise acting on all genes. Pedraza and Qudenaarden also pointed out the striking predictive power of stochastic modeling, by using the Langevin approach and showed, that it is not necessary to have low copy numbers, because noise can propagate from upstream genes [ Pedraza, J. M. $\&$ van Oudenaarden, A. Science 2005]. However, it was also identified, that such cascades could act as a low-pass filter [Hooshangi, S., Thiberge, S. $\&$ Weiss, R. Proc Natl Acad Sci U S A 2005]. Multiple input elements (promoters) are capable of performing diverse logical tasks (e.g. NAND) that depend not only on the regulatory motif (network topology) but also on the strength of the promoter. The same regulatory motif can change its computational function by varying the promoter strength as demonstrated by Guet et. al. [Guet, C. C., Elowitz, M. B., Hsing, W. $\&$ Leibler, S. Science 2002], the role of noise in this context remains an interesting open question.

For adequate prediction of noise it is not sufficient to study the steady state fluctuations.


It is crucial to understand the time span ($\tau _{corr}$ autocorrelation time) under which fluctuations occur. To this end, fluctuations in the production rate of proteins were studied [Rosenfeld, N., Young, J. W., Alon, U., Swain, P. S. $\&$ Elowitz, M. B. Science 2005].

Fitting of the experimental data to the Hill function, resulted in following parameters and standard deviations 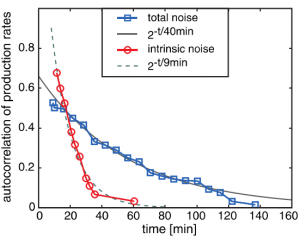