E. coli is usually stored at $-80°$C where cellular processes virtually stop. Under this conditions cells can be stored without growth and the risk of accumulating mutations through replication.

To grow a liquid culture from this frozen stock, I streaked out cells on an agar plate and grew them over night at $37°$C. Single colony forming units (cfus) arose from a single individual bacteria. Since about one mutation after the replication of $10^9$ base pairs (E. coli genome size $4.6 \cdot 10^6$) occurs, it is reasonable to start the liquid culture from a cfu, because then the culture is more likely to be isogenic.

Frozen stocks have been made from cells in exponential phase by spinning down the cells in the centrifuge, discarding the supernatant, and resuspending them in $10\%$ Glycerol. The cells prepared this way can be frozen.

When exponential or unrestricted growth has occurred for some time, all cell constituents begin to increase by the same proportion over the same time interval. In this condition growth is called balanced. The content of DNA, ribosomes and other cell constituents, double in the same time as the cell. In this phase one can figure out the content of all constituents of the cell component by measuring one component, if the ratio between the cell components is known.
If a culture in exponential growth is diluted in fresh medium, the cells will continue to grow exponentially. In contrast, cells in stationary phase need time to readjust their physiological state, when diluted in fresh medium, this results in a lag phase. The longer the cells stay in stationary phase the more profound are the physiological rearrangements necessary for entering the exponential growth phase again.

When cells on the agar plate reached stationary phase, cells rearranged their physiology. Thus the cells had to adjust their physiological state again, when they were transferred into fresh LB-medium. This resulted in a lag phase. When the cells finished the adjustments maximum growth was reached and the cells were in exponential growth phase. When the culture became to crowded, cells slowed their growth and finally they stopped growing at a cell density of about $10^9$cells/ml (stationary phase).

A basic and frequently performed measurement conducted in the laboratory is the determination of cell number and growth in a cell culture.

The most common method to measure cell density in a liquid culture is through measurement of optical density.


There is a minimal cell density the spectrophotometer is able to detect. Above this cell density, the optical density of the probe is linearly dependent on the cell density ($OD \varpropto density$). The proportionality factor varies from machine to machine. 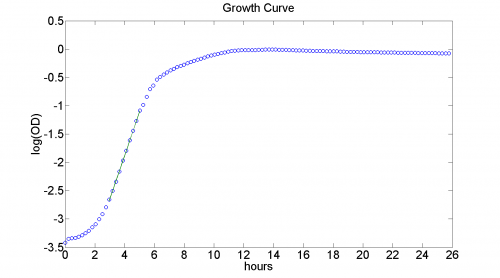 Plot shows the data from an OD-measurement; x-axis has a logarithmic scale to make a linear fit (green line) for determination of the growth rate (k=0,6595 [1/h]).

Optical density measurement also takes into account the dead cells. To count only living cells a "viable count" can be performed. In this procedure I diluted the cells from the liquid culture by a certain factor and streaked them on an agar plate. After incubation I counted the number of cfus and calculated the living bacteria in the culture.

The expected number of cfus to count should be $100-1000$. Consider, that the expected sampling error is $\sqrt{N}$. That is $\pm 10$ ($10\%$) for a count of 100cells/plate and 25 ($4\%$) for a count of 625 cells/plate. The cells are to many to count (TMTC) if the cell concentration in the solution is to high. To calculate the right dilution factor for the liquid culture I relied on the following observations.

For instance, starting with $10^5$ cells after about one cell generation (20-30min) the culture enters the exponential or unrestricted growth phase. The following formula describes the population size.