The cellular membrane separates the interior of the cell or an organelle from the exterior. This membrane forms a barrier for charged particles like ions. The cell is able to transport ions in and out of the cell in a very controlled manner. If the charge on one side of the cell membrane becomes larger than on the other an electric potential difference is present between theses two sides. 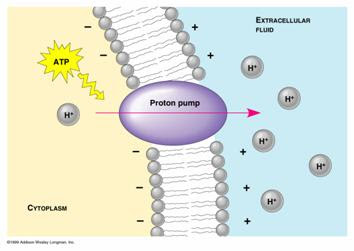 The flux of charged particles through the membrane via a channel leads to a current $J$. On one hand the lipid bilayer provides a barrier, influx or efflux is only possible through channels this slows the current of ions down, so there is a resistance $R$ associated with the channel. On the other hand the membrane separates two sides of unequal charges, which essentially resembles a capacitor with associated capacitance $C$. Let us call the total potential difference between inside and outside of the membrane $V_m$

For given ion concentration inside and outside of the cell, we can calculate the chemical potential due to osmosis. Often it is convenient to work with a potential in units of $mV$, thus we will use the expression

This allows us to calculate the potentials for various ion-channels. We can than model the ion flux in analogy to an electronic circuit.

The conductance is given by 1/resistence

so we find the current $J$ as