The Central Dogma of Molecular Biology states, that DNA is copied by the process of replication, read out to RNA by transcription and translated to protein by translation. The overall process of proteinproduction of a certain gene is also called gene expression. One says a certain gene gets expressed, when its protein is produced.

The central dogma postulated by Francis Crick was first verified by Arthur Kornberg. He purified the enzyme that was thought to carry out replication and tried to replicate DNA in vitro. To this end, he mixed

\begin{align} \text{Primer }5'-pT-pA-pC-pG-pT-pA-\text{added nucleotides by DNA polymerase}\hspace{0.6cm}\\ \text{Template}3'-pA-pT-pG-pC-pA-pT-pT-pA-pG-pG-pC-pT-\dots-5' \end{align} and could show that the enzyme he found called DNA Polymerase I was able to build in the subsequent nucleotides according to the template, in the direction of the 5' to the 3' end. Later it was shown, that this enzyme is not the only DNA Polymerase and that DNA Polymerase II and III exist and that the latter is used in replication.

In an organism there is a lot more going on. First the double stranded DNA has to be split into single strands, this is done by the enzyme helicase. The two strands are then stabilized by single strand binding proteins, that prevent the strands from reannealing. On the so called leading strand DNA polymerase can then start to polymeraize the second strand from the template according to the rules of base pairing, but on the lagging strand continuously primers have to be added, since replication always proceeds from 5' to 3'. This is done by DNA primase. The primer fragments are named after the person Okazaki, who first verified this mechanism and are therefore also called Okazaki fragments. Addition of Okazaki fragments creates another problem, where the polymerase finishes polymerization at a primer, there is no bond between the nucleotides. But there was found a protein called DNA ligase, that ligates the nucleotides by catalyzing a covalent bond. Since the DNA has a helix structure, the replicated DNA strands are twisted around each other. They have to be unwound by the enzyme Topoisomerase, which cuts the DNA unwinds it and ligates it together again. Some antibiotics the quinolones hinder the DNA from replicating by binding to Topoisomerase and preventing the ligase domain from working, this leads to cuts in the DNA and finally to cell death. The same mechanism is used to prevent rapidly dividing cancer cells from replicating. Watch this video to get a vivid picture of the replication process.

The single stranded DNA overhang at the 3' end is called telomer and is a G rich region. The DNA would be shortened by each replication if there wouldn't be the enzyme telomerase, which extends the telomer by adding additional nucleotides according to a template included in the telomerase. The second strand can in turn be synthesised by DNA polymerase that carries a primase as one of its subunits. The DNA is completely copied and no information is lost. 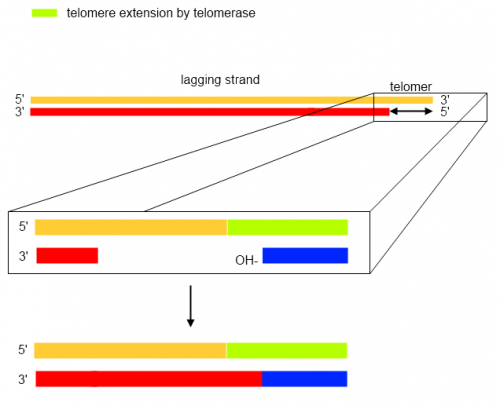 This video gives a nice illustration of the telomerase machinery, which was discovered by Carol W. Greider and Elizabeth Blackburn in 1984, they recieved the nobel prize in 2009.

Transcription is the process of making RNA from a DNA template. The DNA polymer contains a specific sequence of letters that is called the promoter, followed by another sequence, the gene.

Like in the replication process, the helicase splits the DNA in two single strands. Thereby one differs between the template strand, which is the non coding strand and the coding strand.

The RNA polymerase synthesises the messenger RNA (mRNA) from the template strand in a process called elongation. The only difference in the sequence of DNA and mRNA is that in mRNA instead of thymin the base uracil is used. Since the mRNA is complementary to the template strand, the mRNA sequence is the same as the coding sequence of the DNA, except that thymin is replace by uracil. Videos [1][2].

Translation is the process of making a protein from a mRNA template. The information on the mRNA is arranged in so called codons. These are a tripplet of bases. Each of this codon from the mRNA sequence is translated into a aminoacid. This is done by an adapter called transfer RNA (tRNA) that consists of an anti-codon that binds the mRNA and carries a specific amino acid according to the codon. 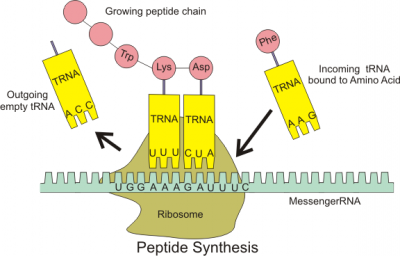