To determine the location of $N$ particles in space, $N$ position vectors $\mathbf{r}_i$ must be given, this means we have $3N$ space coordinates (three directions of space for each particle). The degrees of Freedom are the number of coordinates necessary to fully describe the position of a given system, in Euclidian space this are the $3N$ Cartesian coordinates.

Sometimes an object characterized by a point mass is constrained in its movement. For example a bead with a guide bar through its center is constrained to move along the axis of the bar. 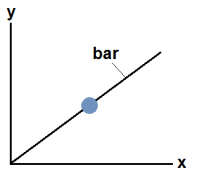 If we know $x$ we can immediately determine $y(x)$ as a function of $x$. Thus the constraint, reduces the degrees of freedom. In general we call the remaining coordinates the generalized coordinates which we denote $q_1,q_2, \dots q_{r}$. Notice, the number of generalized coordinates is not $3N$. For each constraint we have one equation \begin{align} q_i=f(r_1,r_2, \dots ,r_{3N},t) \tag{1} \end{align} which reduces the number of degrees of freedom by one. For $m$ constraints we get $r=3N-m$ generalized coordinates. Constraints given in the form (1) are called holonomic. An example of a nonholonomic constraint is given by a particle whose position is constrained by a sphere with radius $a$. The particle can move everywhere in space, except where the sphere is. If we put the origin at the center of the sphere, the nonholonomic constraint is \begin{align} r^2-a^2 \geq 0 \end{align} Depending on whether or not the constraints explicitly depend on time a constraint is called rheonomous if there is a time dependence or scleronomous if they are not. The above discussed system with the bead on the guiding bar would be rheonomous if the bar would change its position as a function of time.