Since infinitesimal calculus was introduced by Newton and Leibniz the formulation of Newtons equations finally lead to the equations of motion, which are essentially a system of ordinary differential equations (ODEs). The formalism is now arround for a considerable period of time and found applications in numerous areas. There are lots of treatise of dynamical systems presented in mathematical rigor, they can be found in textbooks about differential equations or analysis. Here I want to present dynamical systems in a way, usefull to understand biological systems. To this end, I consinder a dynamical system as a set of $n$ observable measureands $x_i$ (e.g. concentration of a certain metabolite or number of proteins in active state), whereby the rate of change of the $i$-th measurand can depend on the value of $x_i$ itself and all other $n$ measurands ($n+1$ if time is included), so that \( \dot{x_i} \) is in general a function of all measureands \( f_i(x_1, \ldots, x_n) \) \[ \dot{x_1} = \frac{dx_1}{dt} = f_1(x_1, \ldots, x_n) \]

This system of differential equations is also called coupled, since in general the time course of \( {x_i}(x_1, \ldots, x_n,t) \) is dependent or coupled to the concentrations $x_1, \ldots, x_n$, indicating that there is an interaction. Dynamical systems don't consider possible spatial variations in concentration, but the dependency of the rate of change \( \dot{x_i} \) on time $t$ can be considered. 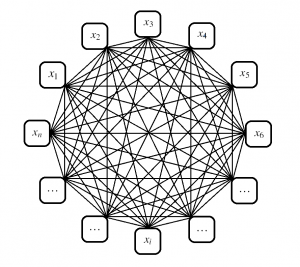 This picture shows the $n$ species $x_1, \dots, x_n$, lines indicate dependencies (or coupling). It also shows that dynamical systems can be thought of as a networks. Lines show interaction.

In real systems, dependencies are restricted. This means, the concentration of a species does not depend on all other speacies, just on a restricted set. The networkstructures that arose from evolution, where found to serve certain functions. Such Network structures appear in organisms more often than at random and are called Network Motifs.