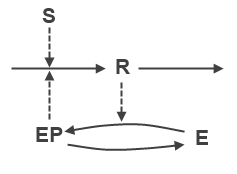 A Fuse is a combination of a Lever and a Buzzer. The response $R$ of the system depends on the signal strength $S$, as $R$ rises it activates the Goltbeter-Koshland switch and $E$ is present in its phosphorylated form $EP$. In this form $EP$ is active and enhances the transcription increasing the response even more. The dynamics of the Fuse obeys the equations

\begin{align} \frac{dR}{dt}&=k_0 EP(R) + k_1 S - k_2 X R\\ EP(R)&=G(k_3R, k_4, J_3, J_4) \end{align} where $G$ is the Goldbeter Koshland function. The graphical analysis (plot of the production rate and the degradation rate) shows three steady states, two stable ones (black) and one unstable steady state i the middle. As the signal $S$ rises, the sigmoidal curve goes up and the lower steady states disappear and the response jumps to the upper steady state. 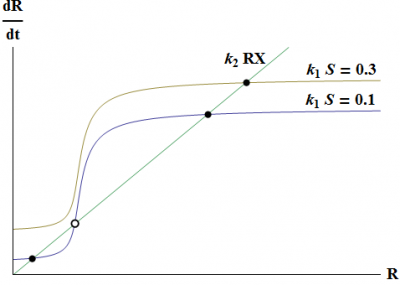 If we plot the steady state response $R$ as a function of the input signal $S$ we find the following signal response curve.