The field of Synthetic Biology allows to construct synthetic genetic circuits with the tools of Genetic Engineering. One of the advances in this relatively new area was the construction of a genetic toggle switch in Escherichia coli. In this wiki article we study the mathematical model that describes the underlying dynamics of the toggle switch system. The switch was successfully tested experimentally by transducing a plasmid with all necessary circuit components into E. coli.

The bistable synthetic gene-regulatory network consists of two promoters and two repressors. The second operon is composed of the promoter 2 the repressor for promoter 1 called repressor 1 and a reporter GFP. Therefore the GFP reports for the expression level of repressor 1.

In the absence of inducer there are two stable states possible:

Assuming the switch is in a stable position, addition of inducer for the repressed repressor causes full activation of transcription, until the originally active repressor is repressed. In this manner the inducers allow to switch between the two stable states. 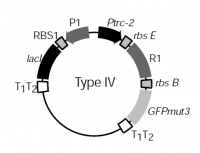 moreover monostable controls, with only one promoter were used

The following dynamics have been observed experimentally 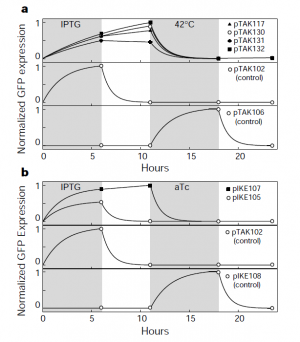 The time evolution of the chemical species is governed by the dimensionless system \begin{align} \dot{u}=\frac{\alpha_1}{1+v^{\beta}}-u\\ \dot{v}=\frac{\alpha_2}{1+u^{\gamma}}-v \end{align} where $u$ is the concentration of repressor 1 and $v$ is the concentration of repressor 2. $\alpha_1$ and $\alpha_2$ are the production rates dictated by the respective promoter, so that $v$ is produced at a maximal rate of $\alpha_2$ and $u$ at a maximal rate of $\alpha_1$. The ratios represent the well known Hill function for $K_m=1$ and $\beta$ and $\gamma$ are cooperativity coefficients. To analyse the model we first observe the nullclines by setting $\dot{x}=\dot{y}=0$, so we get \begin{align} u=\frac{\alpha_1}{1+v^{\beta}}\\ v=\frac{\alpha_2}{1+u^{\gamma}} \end{align} To see how the nullclines change throughout the four-dimensional parameterspace play with the paremeters $\alpha_1,\alpha_2,\beta, \gamma$. You can use Mathematica with the Manipulate command. 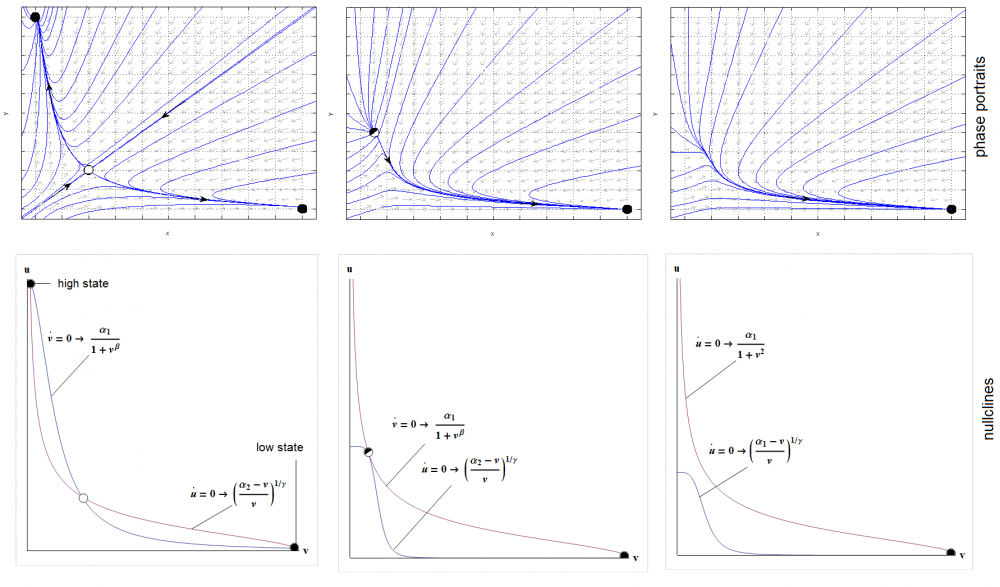 This results explain, why the pIKE105 strain does not exhibit bistable behaviour. Since the strength of the pIKE105 RBS is too weak, $\alpha_1$ is so small that the nullclines don't intersect, except at the 'low' state like displayed in the rightmost nullcline picture above.