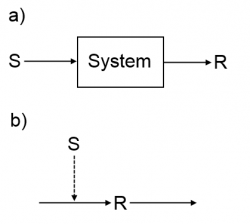 In this article we study the response $R$ (protein concentration) to the input signal $S$ (mRNA concentration). We call $S$ the input of the system and $R$ the response or output of the system. In control engineering a block diagram is often used to give a grafic illustration of the signal flow [figure a)]. The system dynamics is governed by the transfer function. In a transcription network arrows represent reactions and letter stand for species. In the reaction $\rightarrow R \rightarrow$ the first arrow indicates production of $R$ and the right arrow the degradation of $R$. To indicate that the signal $S$ acts on the rate of production, a dashed arrow points on $R'$s production arrow [see figure b)]. Let the degradation rate of $R$ be $\alpha$, then we can write the equation governing the dynamics of the lever as \begin{align} \frac{dR}{dt}=k_1 S - \alpha R \end{align} The steady state of the system $R_{St}$ is given by \begin{align} \frac{dR}{dt}=0 \Rightarrow R_{St}=\frac{k_1 S}{\alpha} \end{align} The steady state response of the system can be illustrated, by plotting the steady state response $R_{St}$ as a function of the signal. Such a plot is called a signal-response curve. 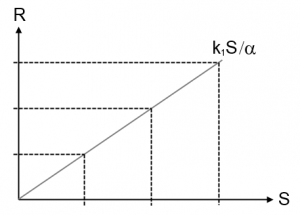 Signal-Response Curve of the Lever