A matrix is simply an array of numbers. More important however is where they come from and what we can do with them. In other words why we are interested in them in the first place. To this end let us study a system of linear equations. We consider a system of two equations with two unknowns of the form

There are two ways of looking at these equations called the row picture and the column picture, which we will examine now in more detail.

The row picture is what you should already be familiar with. A linear equation can be plottet as a straight line with a certain slope. If we plot a line for both equations, the intersection gives the point where both equations are satisfied. The coordinates of $x$ and $y$ at this point are the solution to the system of equations $(x,y)=(1,2)$. 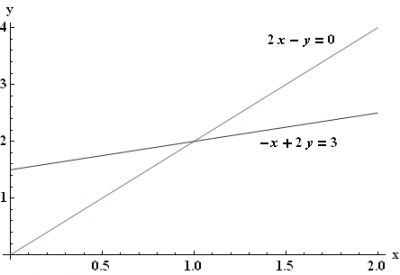 In three dimensions equations can be represented by planes. The solution is given by the point $(x,y,z)$ , where all three plains intersect.

The column picture is a new concept. We try to look at the columns of the matrix $\mathbf{A}$. To make this more clear let us write the equations as \begin{align} \begin{bmatrix} 2\\ -1\\ \end{bmatrix} x + \begin{bmatrix} -1\\ 2\\ \end{bmatrix} y =\begin{bmatrix} 0\\ 3\\ \end{bmatrix} \end{align} The columns are also called vectors. In this form the solution is given by adding the right amount $x$ of the first vector plus the right amount $y$ of the second vector so that we get the vector $b=(0,3)$ on the RHS. Sums of scalars times vectors e.g. $c \cdot \mathbf{v} + d \cdot \mathbf{w}$ are called linear combinations. So to use the right terminology, we are searching for the solution, which is the linear combination that satisfies the equation. A matrix that multiplies a vector, can always be thought of as a linear combination of the columns of $\mathbf{A}$. If we plot the vectors, we can immediately spot the solution. 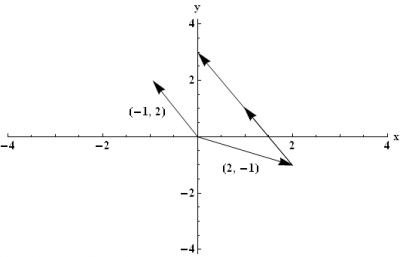 Taking one vector $(-2,1)$ and add it to two vectors $(2,-1)$, we get indeed the vector $(0,3)$. We can go on and ask the more general question: Has $\mathbf{Ax}=\mathbf{b}$ always a solution? Interpreting this question in with the column picture we can formulate this question differently. Do the linear combinations of the columns of $\mathbf{A}$ fill the plane?

Many other articles will focus on the development of a theory that allows to answer this question and to find requirements the matrix $\mathbf{A}$ must satisfy in order to solve the system.