Osmosis and the Cell Membrane

Imagine a cell membrane that separates two regions IN and OUT. The membrane shall contain a transporter that allows only specific molecules to pass. To be explicit assume a Symporter, that simultaneously exports succinic acid ($suc^-$, shown in green) and $n$ protons $n H^+$, shown in red out of the cell, additionally there will also be a solvent. 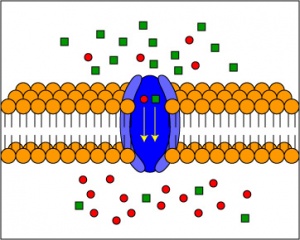 Let's assume that the succinic acid concentration inside the cell is high compared to the outside and that the pH outside is lower $pH=3,5$ (which means high proton concentration $10^{-3.5}M$) than inside $pH=6$. In this situation the solutes tend to mix with the solvent. This phenomenon is known as osmosis and is a direct consequence of the second law of thermodynamics. Since molecules can pass only in one direction (from inside to outside) succinic acid is pulled out of the cell to mix with the protons. In the mixed state the entropy of the closed system (inside + outside) is larger than in the unmixed state, the mixed state is much more probable so the system will evolve to that state and reach equilibrium.

In biological thermodynamics the potential difference $\Delta \mu$ is defined as the difference between the chemical potential inside and outside the cell membrane \begin{align} \Delta \mu &= \sum_j \mu_j^{(IN)} -\sum_i \mu_i^{(OUT)} \tag{2} \\ \end{align} This is a purely conventional matter, since we could also define $\Delta \mu$ as $\sum_i \mu_i^{(OUT)}-\sum_j \mu_j^{(IN)}$. However, in biology the definition (2) has a tradition, stemming from the study of proton gradients, which are maintained by the electron transport chain. The electron transport chain is part of the photosynthesis machinary and pumps protons through the cell membrane. This process requires energy, which for example comes from the harvesting of light. Since protons are pumped out e.g. the mitochondria or the chloroplast, there are more protons outside than inside. The resulting force due to the gradient points therefore from outside to inside. This force is called proton-motive force (PMF) and drives the ATP production via the ATP Synthase.

and the explicit form for the proton-motive force is \begin{align} \Delta p = \frac{\Delta G_{H^+}}{F} &= \frac{2.3 R \cdot T}{zF} \Delta pH\\ \tag{5} \end{align} Many biology and chemistry textbooks that do not elaborate on the thermodynamics and the origin of this equation (compare Rob Philipps with Nicholls and Harold), don't discriminate between $\Delta G$ and $\Delta \mu$ and define the PMF as $\frac{\Delta \mu_{H^+}}{F}$, which is wrong by the factor $N_A$. As you can see, the form is equivalent, with the definition of the electrode potential.

Moreover, what we did not include yet is the fact, that the different levels of charge on both sides of the membrane give rise to an electric potential in which the succinic acid moves through the transporter. This electric potential can either add to, or counteract the chemical potential due to osmosis. The calculations above would be correct, if the $n=1$ and with each $suc^-$ molecule one proton $H^+$ (together they form a neutral complex) is transported. Charged molecules or complexes in contrary are affected by the electric potential. In general a charged particle is subject to the Lorentz force. The influence of the electric potential on ions is discussed in the article Cells and Membrane Potentials - Equivalent Circuits.