Bacteria not only have circular chromosomes, they also have little circular pieces of DNA called Episomes or Plasmides. 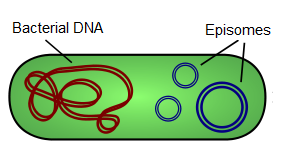 Episomes often carry antibiotic resistence genes e.g. against penicilin. The reason for that is, that when bacteria die, their cell walls open and the episomes spread all over the place. Neighbouring cells are then able to incorporate this episomes. This is also the reason why bacterial resistance spreads so fast among populations and it's the origin of the problem of antibiotics resistance. Notice, we, the humans did not invent antibiotics, fungi like yeast developed antibiotics much earlier than we found it. This is a general fact, almost every tool of genetic engineering comes from the understanding of naturally occuring mechanisms. Fungi developed antibiotics to fight bacteria just like we do now. In the same manner we can use the Episomes for our engineering pourposes. We could simply add our gene of interest to the plasmid by means of restriction enzymes and ligase. Such small circular DNA of about (1-1000) kBp used in Genetic Engineering are also called vector. If we treat the cells for example by applying high voltage across a special tube, the cells disrupt and can take up vectors, the cells are then called competent (see How to prepare electrocompetent ''E. coli'').

How can we guarantee that each bacteria has incorporated one plasmid?

If we add to much vector to the competent cells, they will take up more than one vector, this is not convenient. The method that is often used, is to keep the bacteria to plasmid ratio high, so that only occasionally a plasmid is taken up. The bacteria that took up a plasmid can be selected by adding an antibiotic resistence gene to the plasmid and add antibiotics to the growth medium. This way only cells that took up a plasmid will survive. 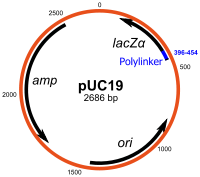 This plasmid contains additionally to the Ampicilin resistance gene (amp) the gene for lacZ$\alpha$ which codes for an enzyme that brakes down a molecule called X-gal with a similar structure as the sugar lactose. The products are glucose and another molecule that further reacts to a blue molecule. This way colonies that are blue have taken up a vector. Besides the antibiotic resistance gene this is another method to select for bacteria that took up a plasmid. This technique is known as blue/white screening.

How can the gene expression level be controlled externally?

To control the gene expression level of a plasmid the promoter of the ''lac'' operon is often used. The promoter can be induced by IPTG a metabolite with a similar sturcture as lactose, that is in contrast to lactose not degraded (see article ''lac'' operon). Thus the IPTG concentration remains constant and can be used to control gene expression experimentally. The more IPTG is added the more transcription is induced (see article Simple Gene Regulation).