The promoter site is a DNA sequence, where RNA polymerase (RNAP) binds to perform transcription. The strengh at which the promoter binds RNA polymerse determines how often a gene is transcribed and therefore, how many copies of mRNA exist. The strength with which the RNAP binds depends on two regions of the promoter that differ between procaryotes and eucaryotes. 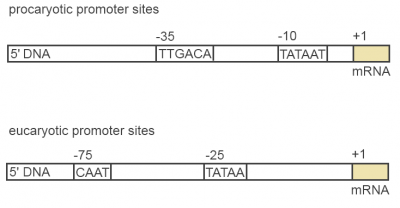 TTGACA
could be altered by replacing nucleotides at specific places


The procaryotic promoters include two consensus sequences. One 35 nucleotides upstream and another -10 letters upstream of the mRNA transcription start site (see picture above). The first letter read out by RNAP is denoted with the number one. In the procariotic gene of E. coli about 2000 promoters exist.

The reason for the importance of this regions can be found in the sturcture of the RNA polymerase. The consensus sequences happen to bind the sigma-factor subunits $\sigma_4$ (TTGACA) and $\sigma_2$ (TATAAT) of the whole RNApolymerase complex also called holoenzyme. This amazing picture shows the structure of the promoter-RNAP complex, revealed by cristallographyic studies. 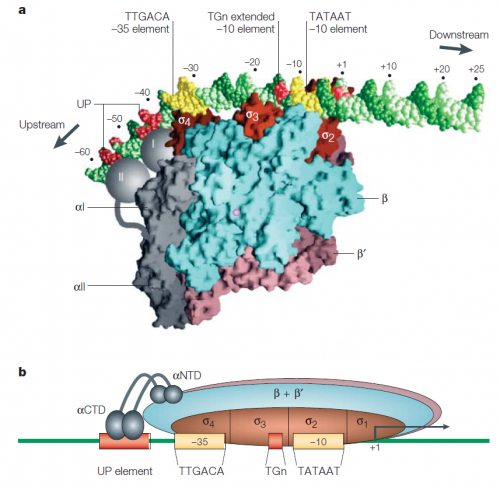