All restriction enzymes available fill whole catalogs and can also be found online where you can type in a sequence and search for the enzyme that cuts the site of your interest. Visit the REBASE website for this purpose.

Restriction enzymes were first identified in the laboratories of Salvador Luria at MIT. He studied bacteriaphage that infected two different strains of bacteria. While the first E. coli strain (strain A) is infected by the phage, the second strain (strain B) has some defence mechanism and is resistant. So strain A shows so called plaques where viruses killed cells and made holes in the lawn of bacteria. In strain B however only occasionally some plaque can be observed. This suggests that the virus has mutated to overcome the resistence of the bacteria. This is plausible since viruses from a plaque of strain B grow on both strain A and strain B. But if again a virus from stain A is taken and transfered to strain B, only occasionally a plaque can be found. So the first guess, that the virus mutated can not be right.

How does passage of the resistant virus through strain A make the virus loose its ability to grow on strain B? 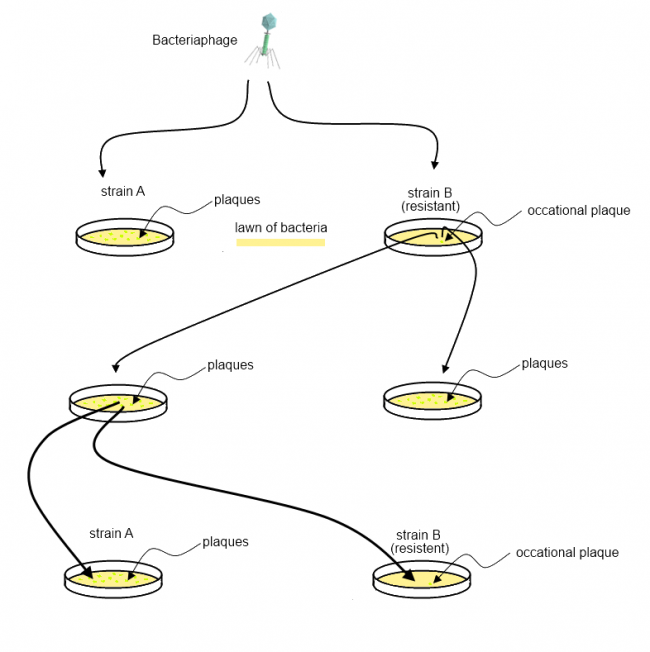 Strain B has the ability to restrict the growth of the virus. Salvador Luria found out that strain B has a restriction enzyme that cuts the DNA of the virus, thus protecting the bacteria. But why the bacteria doesn't cut its own DNA? Luria found that strain B blocks the restriction enzymes by attaching methyl groups $CH_3$ to its DNA by the enzyme methylase.

The resistence of the virus can then be explained by the occasional methylation of viral DNA by methylase. While passage of the virus through strain B it keeps the methylation. But in strain A methylation it not beneficial anymore so the virus looses its methylation and can't grow on strain B any longer. This is what really explains the experiment shown in the picture above, and by the way lead to the discovery of the restriction enzyme.