The laws of Classical Mechanics are deterministic and reversible. To illustrate what this means, we study the dynamics of system that can only take discrete states. For simplicity let us consider coin tossing. The system (coin) can be in two states, either head $H$ or tail $T$. We can describe the discrete time evolution of the system if we know the laws. For example a law could be, that if the system is in one state it remains in this state. \begin{equation} H \rightarrow H\\ T \rightarrow T \end{equation} In graphical notation we can write this as

were in each time step the system transits to the other state. If the initial condition is head, the time evolution is $HTHTHTHT\dots$ whereas if we start with $T$ we have $THTHTHTH\dots$. 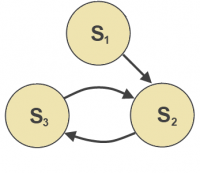 This system is non-reversible, because if the state $S_2$ is the initial condition, we can't retrodict the time evolution, since the system could come both from $S_1$ and $S_3$ to $S_2$. This means although the laws are deterministic the system is not reversible.

To study conserved quantities we set the stage by introducing a system, which can be in six different states. A possible law that governs the behaviour of the system could be 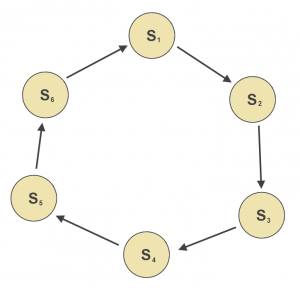 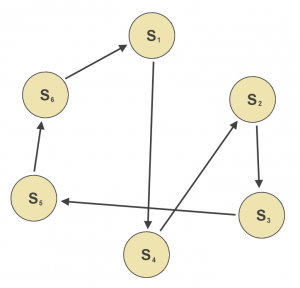 In fact, these laws are identical since they differ only by the labelling of the states. But what about this law? 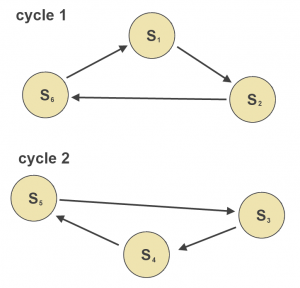 If we are on cycle 1 we stay on cycle 1 for all times, no matter if we pre- or retrodict the behaviour of the system. The same thing is true for the cycle 2. If we start on cycle 2 we stay there for all times. Hence, if the initial conditions are on cycle 1 $S_3,S_4,S_5$ are not accessible for the system. If only a limited number of the states are accessed by the system, this indicates a conserved quantity. We will see that energy is such a conserved quantity, as can be seen in the example of the Harmonic Oscillator. The accessible points in phase space for a certain energy of the oscillator lie on an ellipse.