The scenario described in Gene Regulation and Protein Levels is an example for simple regulation were the transcription factor $X$ regulates the expression of gene $Y$ (the production of a protein in response to mRNA concentration is treated in the article about the Lever). \begin{equation} X \rightarrow Y \end{equation}

If the signal $S_x$ appears, $X$ gets activated and the gene is transcribed, leading to a accumulation of protein Y through translation. The maximal rate of production is denoted $\beta$, considering constant production rate we refer to $\beta$ simply as production rate ($\beta$ could also be a function of a TF $\beta (TF)$). If a signal appears, the TF is pushed in its active state. This occurs much faster (1-100$\mu s$), than translation (40aa/sec $\rightarrow \sim$ 2min). Therefore separation of time scales applies and transcription factors are assumed to be in the active state. 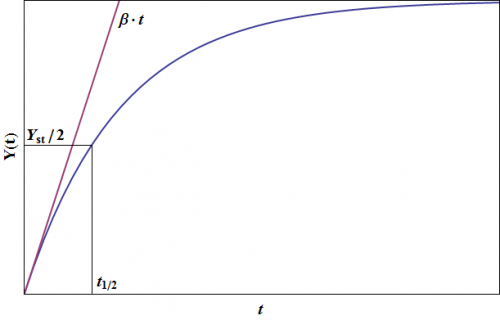 How fast is $Y$ produced? This can be answered by the response time, which indicates how long it takes to reach the concentration $Y_{st}/2$ \begin{equation} \frac{Y_{st}}{2}=Y_{st}(1-e^{-\alpha T_{1/2}}) \end{equation} The response time $T_{1/2}$ \begin{equation} T_{1/2}=\frac{log(2)}{\alpha} \tag{2} \end{equation} depends only on $\alpha$ but not on $\beta$ the production rate. For the cell it is crucial to respond fast to an environmental change. According to $T_{1/2}=\frac{log(2)}{\alpha}$ the response time can be increased by increasing $\alpha$, but by increasing $\alpha$ the protein level $Y_{st}$ decreases. The bacteria would have to adjust the production rate $\beta$ accordingly, to reach the same steady state. The cell can increase the response time by the expense of a futile cycle of high production and degradation.

For proteins that are not degraded by the cell $\alpha_{deg}=0$ the response time is equal to one cell generation $\tau$, since in one generation time the cell divides and the concentration drops by a factor of $1/2$. In this case it holds that \begin{equation} T_{1/2}=\frac{log(2)}{\alpha_{deg}}=\tau \end{equation} Considering proteins with $\alpha_{deg}=0$, E. coli needs about $30$ minutes to reach half of the final protein level ${Y_{st}}/{2}$. This is also the case in many proteins that form dimers. Dimers are degraded much slower than monomers, thus after dimerisation, dilution is the main source of protein shrinkage. In this case the generation time is a good measure for the response time as well [Buchler, Gerland, Hwa - PNAS 2004].