In another article we discussed the Galilean Transformation. In early physics before the 19th centruy physicists believed that there is some special frame of reference in which all the planets move, including the earth. Relative to this special frame of reference they suspected some medium called the aether, which has the property that it is at rest in this reference frame. If such an aether exists - so was the hypothesis - light moves faster when traveling with the direction of the eather than against the direction of the eather. Just like you swim slower against current, than with it. Thus they expected the light to obey the Galilean Transformation. 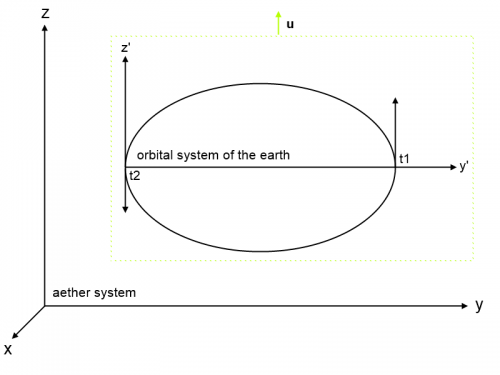 We will now develop the theoretical framework that is able to explain the described phenomena above and do so by roughly following Albert Einsteins argumentation in his famous work "Zur Elektrodynamik bewegter Körper". But let's first introduce the simplest ideas of what a Minkowsky Diagram is. To examine an event in two different frames of reference, we want to know how one reference frame $A$ is described in another $B$. Let the velocity with which $A$ moves according to $B$ be denoted $v$. If we just consider one coordinate axis (horizontal) and a time axis (vertical), an event can be described by a point in this graph. Moreover, the system $B$ moving with $v$ in the $x$-direction, is in the reference frame $A$ characterized by a line $x=v \cdot t$ 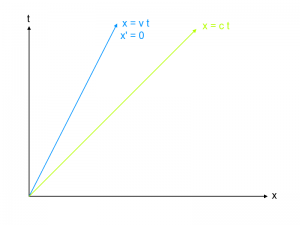 Notice, while an event occurs at $x=v \cdot t$ in System $A$, the same event in the moving system $B$ is described by the coordinate $x'=0$. If the relative velocity of the reference frames would be $c$ this would be very unconvenient to draw in standard units. The speed of light is so large that the line $x=ct$ would be practically horizontal. Thus we choose lightseconds as a measure for distance so that $c$ is one lightsecond per second. In this case $x=ct$ follows the median at a $45°$ angle. A light ray with velocity $-c$ would be represented by the line $x=ct$ mirrored at the time axis. 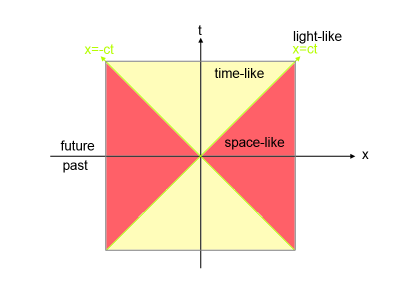 From this we can immediately tell, that a moving frame can only reach points above the graph $x=ct$ of light, as time goes forward, such events are called time-like (they satisfy $t^2-x^2/c^2>0$), since you can reach them as time moves forward. Events below the graph $x=ct$ of light are only reachable if you start from a point $x \not =0$, so you have to move in space to reach such a point, thus this events are called space-like (they satisfy $x^2-t^2c^2>0$). Not suprisingly the points on the line $x=ct$ are called light-like; they behave like light.

Two systems $S$ and $S'$ more with velocity $v$ against each other. Each system consists of two lasers positioned at $A$ and $B$ or likewise $A'$ and $B'$ seperated by a distance $L$. Inbetween this lasers is an Observer $O$ and $O'$ respectivley. To synchronise clocks located at $A$ and $B$ a light beam is sent out to the observer, traveling the same distance $\overline{AO}=\overline{BO}$. We define clocks as synchronous if they measure the same time as their lighbeam reaches the obeserver $O$ in this set-up.

If the clocks are synchronised in the system $S$, both the light beam from $A$ and $B$ would reach $O$ simultaniously. But what does the observer $O'$ see? We assume that clocks at $A'$ and $B'$ are synchronised according to $O'$. During the time the light needs to travel the distance $\bar{AO}$, say $\Delta t=t_1-t_0$, the moving system $S'$ has moved by $\Delta x$ to the right. 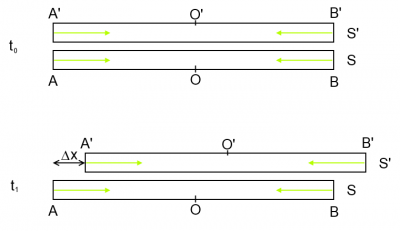 But this means, a light beam coming from $B$ reaches the observer $O'$ sooner than the light beam from $A$. Thus $O'$ would say that $B$ emitted the lightbeam first, before $A$. In the frame of reference of system $S'$ the clocks at $A$ and $B$ would therefore be asynchronous. 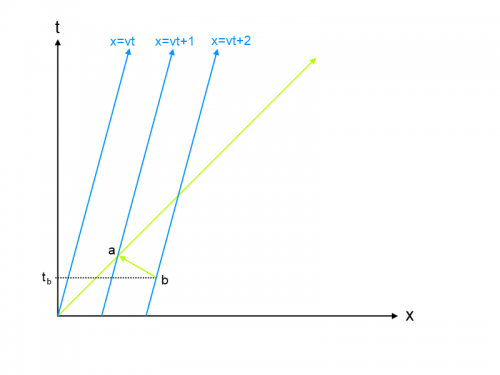 The important question is, at which time $t_b$ does the signal from $B$ have to be emitted, so that $O'$ would say $A$ and $B$ are synchronous? A light beam sent from $A$ travels from the origin to $a$ with speed $c$. A light ray sent at the right time $t_b$ travels from $b$ to $a$ with speed $-c$. Now, let us find the coordinates of the points $a$ and $b$. We do so by simply calculating the intersection of $x=ct$ and $x=vt+1$. For the point $a$ we find the coordinates

All points laying on the line with slope $t/x=v$ correspond to some time for which an event in $S$ is simultanious in $S'$, thus this line corresponds to the time $t'=0$ in system $S'$. 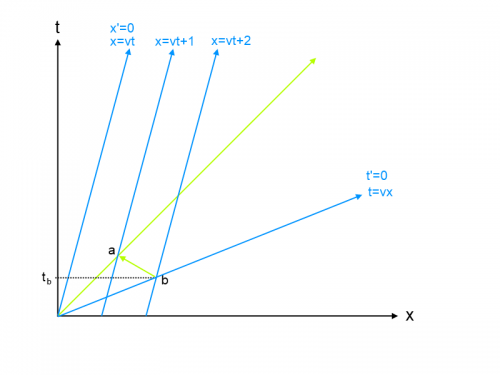 Notice the symmetry in $x$ and $t$ of the equations $x=vt$ and $t=vx$. Graphically this means (provided we choose the same scaling for both axis), if you have one equation (or graph) you find the other by interchanging $x$ and $t$, which says reflect one graph (e.g. $x=vt$) about the median to get the other graph (e.g. $t=vx$). This symmetry leads to the same angle $\alpha$ between the time and coordinate axis respectively. 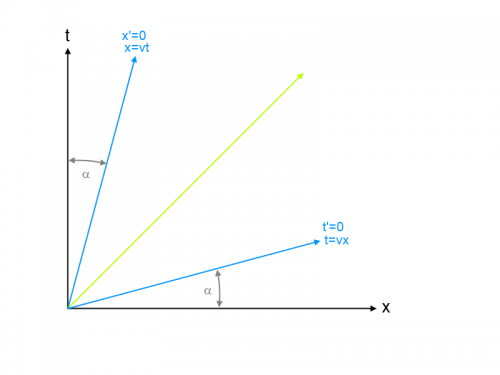 Finally we would like to know how to transform between the two frames of reference $S$ and $S'$.

with the dimensions of $vx$ fixed to be time. Let us no examine an event, in two different frames of reference by using a Minkowski diagram. 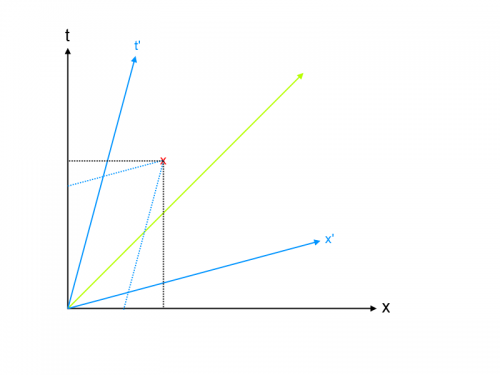