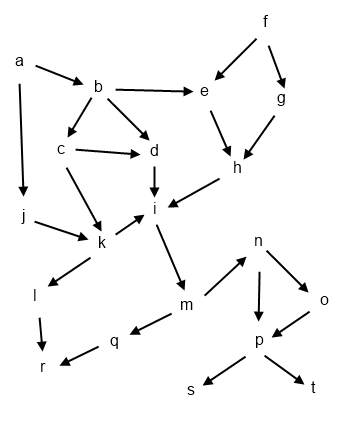 This picture shows a hypothetical transcription network. Gene a regulates gene b and j, gene b regualtes gene c,d and e and so on...

Transcrition factors can be activators or repressors, thus the arrows can have positive or negative signs. Negative interaction (repression) is often indicated by the sign $\perp$ then the positive interaction (activation) is marked with an arrow $\downarrow$. Outgoing arrows of a certain knot are more correlated than incoming arrows, meaning that if an outgoing arrow is positive, the others are more likely to be positive too and vice versa. This fact also applies to neural networks and is known as Dale's rule.

It is amazing that the genetic difference between humans and chimpanzees is just about $4\%$. This indicates that differences in the number of genes is low and underlines the importance of regulatory differences as to where and when a gene is expressed [1].

Transcription networks are built of small modules called network motifs. Sice the equations that describe these networks are often nonlinear, one has to ask, what parts of a network can be seperated and studied in isolation without destroying the network. It turns out that such separable entities are network motifs. Network motifs are themselfs nonlinear modules which can't be futher devided in smaller parts, but the modules can be studied individually and than joined together. The mathematical relationship between modules must therefore be linear.

For detailed information about network structures visit the following databases