To introduce the solution method called method of characteristics in an intuitive way at the example of the transport equation, we imagine a device that consists of a pipe with constant radius $r$ and a valve in which a chemical can be injected. This pipe contains a fluid, for example water.

Thus the concentration $u(x)$ varies with $x$ along the pipe so that $u(x)=e^{-x^2}$ (for $x_0=0$). Now we ask, how the fluid containing the chemical moves forward, when pressure is applied so that the fluid starts moving. Since there is no diffusion and no turbulences in the pipe the package of fluid containing the chemical is shifted along the pipe with some velocity $v$. The shape $e^{-x^2}$ thereby is preserved. After time $\Delta t$ the package was transported the distance $\Delta x =v \cdot \Delta t$ in the direction of $v$. So we can give the concentration profile $u(x)$ after the time $\Delta t$ as simply shifting the curve $e^{-x}$ by $\Delta x$ to the right. This can be done by adding $-v \cdot \Delta t$ to the independent variable $x$, so we get $e^{-(x-x_0)^2}=e^{-(x-v\cdot \Delta t)}$. Notice, $u$ is now both a function of $x$ and $\Delta t$. For some arbitrary time $t$ the displacement of the concentration profile can be written as

If we now plot the concentration as a function of space and time, we observe the following 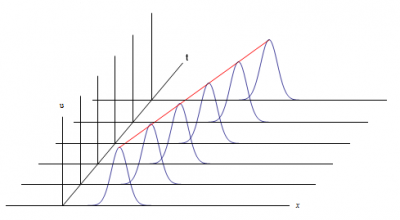 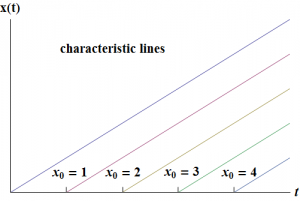 What would an observer see, from a different coordinate system $S$ that moves relative to the pipe? Let the position of this observer relative to the pipe be $x(t)$ and still the concentration is $u(x,t)$, then the time differentiation by the chain rule is \begin{align} \frac{d}{dt}u(x(t),t)=u_x \frac{dx}{dt} + u_t \end{align} This means, if $\frac{d}{dt}u(x,t)=0$ the concentration profile for the observer on $S$ does not change with time. In other words, the coordinate system $S$ moves at the same speed $v$ as the fluid. This is exactly the case, when $x(t)=x_0+vt$ as we derived above. Therefore, characteristic lines are curves $x(t)$ along which the concentration profile only depends on one variable $x$. Change of coordinates into the system $x(t)$ makes the concentration independent of time.